Graphics artist, Ellen Spencer will be leading a special training session called "So You Wanna Be In Pictures?".

It's about... well... EVERYTHING to do with taking digital photos, editing them, uploading to the web so you can share them... and how then to share them online with your friend & neighbors.

Be with us, at the cafe that day.
Posted by IndyChristian at 1:37 PM No comments: 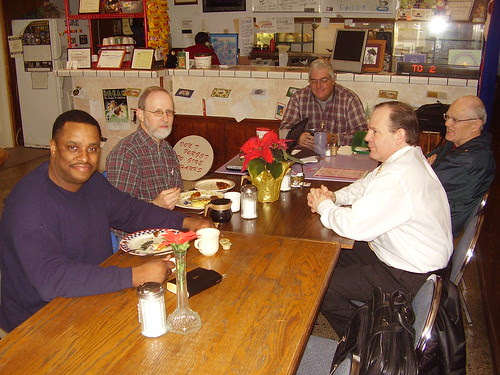 This morning at the cafe, we hosted Rev. Lionel Batke from Vancouver, British Columbia (Canadian).

[Lionel is 2nd from the right.]

Posted by IndyChristian at 10:11 AM No comments:

"Effective January 1st, hundreds of police officers will come together as a single force due to the consolidation of the Marion County Sheriff's Department and Indianapolis Police Department. This Video Magazine was created in order to inform Indianapolis and Marion County residents about what to expect when the best of these two world-class law enforcement agencies come together to form the new Indianapolis Metropolitan Police Force."

[Watch the videos at PoliceMerger.IndyGov.org]
Posted by IndyChristian at 3:02 PM No comments:

[How cool is this! Praise God for this brother...]

Atlanta holy hip hop artist, 'J4J' has just finished producing "Lifting Him Up" -- a soundtrack especially for our TechMission program -- helping our friends and neighbors 'cross the 3 great divides'...

The TechMission program is underway at the Unleavened Bread Cafe, a 501(c)3 ministry in the heart of Indy's inner-city. Come down and join us any Saturday morning, 10 a.m. til noon.

'J4J' -- Reginald Blanchard -- has been nominated for a 'Gospel Choice Award' as Best Holy Hip Hop Artist for 2006. But more than that, Reggie himself is a tech-adept, e-capable Christian who knows the importance and the power of acquiring internet skills... no matter what your profession. Check out his MySpace page as he uses it to network with others, and utilize his talents for the glory of God.

Then visit his commercial site... J4Jmusic.com.

But most importantly, listen to the lyrics as he guides young people toward Christ, acknowledging Him daily, and a life-long learning.

[Reggie, we praise God for you!]

Posted by IndyChristian at 8:50 PM No comments:

From Tom Walker
President - One Accord Minnistry

Blessings to you all in the name of our risen Lord. A free prayer reception is being held at the Unleavened Bread Cafe (30th x Central Ave, map-link RSVP if you can) at 9 AM Saturday, Dec. 16th for new friend of Indiana, Pastor Lionel Batke, who is visiting us from Vancouver, British Columbia some 2400 miles away. Lionel is connected with my friends from Prayer Canada of Surrey, BC whom I visited back in September.

I wish to take some time Saturday to pray for Lionel (you could say a prayer for him now..) but I believe Lionel would much rather spend time praying for Indianapolis' needs so come and agree with us in prayer. Feel free to purchase breakfast from the Cafe while with us for the hour and Lionel and I will stick around for an additional hour to create additional linkages and time for additional prayer as the Spirit leads. It's important that Lionel connects with key leaders like yourselves while here to further improve and create US/Canadian spiritual collaboration.
Lionel Batke

PERSONAL PROFILELionel Batke was born and raised the son of a leading Full Gospel Pastor in Western Canada. He was trained in ministry and music as a youth. When he sings, his strong baritone voice can fill the largest auditorium. The Full Gospel Bible Institute, Eston, Saskatchewan provided further training and graduation in 1963.

In 1965 he was ordained into the ministry and during the early years served as pastor of churches in Saskatchewan and British Columbia. He and his wife, Virginia, of over 40 years live in Vancouver and have three children. This new generation in turn, are raising up nine grandchildren to be a godly seed in the earth.

As a father, he desires to mentor competent and effective ministry that will serve the next generation by the will of God. To this end he travels internationally with the burden of a teaching and prophetic ministry, equipping especially leaders to fulfill their personal purpose and call in God.

Real hunger and thirst for the fresh water of life forced his spiritual roots down deeply into Ireland during the latter days of Charismatic Renewal among Roman Catholics. This opened up his life and ministry to the whole Church and the whole world, further preparing him for ongoing prophetic input into a growing number of nations.

I look forward to seeing you all there Saturday!

May God bless you and all those you love ,

Posted by IndyChristian at 5:07 PM No comments:

Abbott and Costello Buy A Computer...

If you're old enough to remember Abbott and Costello, you may also be just old enough to have these kinds of computer questions. If so, come on down to the cafe any Saturday morning, 10am til noon. It's all free, and it's all good. Just ask Who.

Listen to the original
Visit Baseball-Almanac.com.


ABBOTT AND COSTELLO BUY A COMPUTER
by Tom King

For those of us who sometimes get flustered by our computers, read on.

If Bud Abbott and Lou Costello were alive today, their infamous sketch, "Who's on First?" might have turned out something like this:

COSTELLO CALLS TO BUY A COMPUTER FROM ABBOTT

COSTELLO: Thanks. I'm setting up an office in my den and I'm thinking about buying a computer.

COSTELLO: No, the name's Lou.

COSTELLO: I don't own a computer. I want to buy one.

COSTELLO: I told you, my name's Lou.

ABBOTT: What about Windows?

COSTELLO: Why? Will it get stuffy?

ABBOTT: Do you want a computer with Windows?

COSTELLO: I don't know. What will I see when I look at the windows?

COSTELLO: Never mind the windows. I need a computer and software.

COSTELLO: No. On the computer! I need something I can use to write proposals and track expenses and run my business. What do you have?

COSTELLO: Yeah, for my office. Can you recommend anything?

ABBOTT: I just did.

COSTELLO: You just did what?

COSTELLO: You recommended something?

COSTELLO: For my office?

COSTELLO: OK, what did you recommend for my office?

COSTELLO: Yes, for my office!

ABBOTT: I recommend Office with Windows.

COSTELLO: I already have an office with windows! OK, let's just say I'm sitting at my computer and I want to type a proposal. What do I need?

COSTELLO: The only word in office is office.

ABBOTT: The Word in Office for Windows.

COSTELLO: Which word in office for windows?

ABBOTT: The Word you get when you click the blue "W".

COSTELLO: I'm going to click your blue "w" if you don't start with some straight answers. What about financial bookkeeping? You have anything I can track my money with?

COSTELLO: That's right. What do you have?

COSTELLO: I need money to track my money?

ABBOTT: It comes bundled with your computer.

COSTELLO: What's bundled with my computer?

COSTELLO: Money comes with my computer?

COSTELLO: I get a bundle of money with my computer? How much?

ABBOTT: Microsoft gave us a license to copy Money.

COSTELLO: They can give you a license to copy money?

ABBOTT: Why not? THEY OWN IT!

COSTELLO: How do I turn my computer off?

************
Subsequent note: Here are some of the shots from among the 45 leaders gathered together that day!

[Visit Flickr.com to see the growing set of 'ubcafe' photos]
Posted by IndyChristian at 8:06 AM No comments: