The below info pertains to the Mapleton Fall Creek neighborhood. Here's our wiki full of key links re our neighborhood.

TAB has graciously agreed to host the meeting on November 19th, from 6:30 – 8:30 pm. Please help us get the word out bycirculating the attached information to your church or association membership,or anyone else who has an interest in the future of Mapleton-Fall Creek.

The meeting will begin with a presentation by De’Amon Harges(invited) regarding some of his findings as a “roving listener” in theMapleton-Fall Creek Neighborhood. Thiswill be followed by roundtable discussions on a variety of topics: Economic Development, Greenspace/Parks,Infrastructure, Housing, Others? Thediscussions will focus on current neighborhood assets, a vision for the futureand steps to achieve that vision. Wewill be looking for both long-term goals and some immediate action items tohelp guide the MFCDC set its agenda for 2008 and beyond.

We are looking for volunteers to help with the following:

On November 19th, we will need help with thefollowing:

Many hands make light work! If you can help with any of the above tasks, please let me know.

Sally Spiers
Posted by IndyChristian at 9:27 AM No comments: 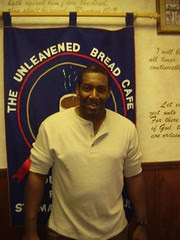 My good friend, Ian Hookfin, is back 'in the house' at the cafe today. God working through him, Ian was the one who introduced me to the cafe... back in 2000. He was the Community Ministries director when I came to work at Tab and we quickly became friends.

[The then-pastor disparagingly referred to us as... "oh you fundamentalists". LOL. But that's a story for another day.]

Anyway, one day Ian said to me, "So ya wanna do urban ministry, do you? Well get in the car."

Ian drove me up and down the narrow streets near the church, and at one point pulled over to the curb on a pretty desolate corner... 30th x Central Ave... and said, "Get out".

He clarified... "Get out, we're going in. This is the Unleavened Bread Cafe. You're gonna love it."

It was so good to see him again -- it's been way too long. He's now a PT (physical trainer) up in Carmel, and one of our techs at the cafe was able to help Ian with some web stuff.... 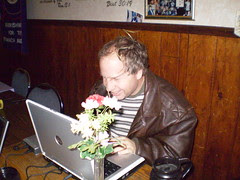 [Bryan Rohrer, Internet Design Works, was back in the house today too. Thanks Bryan!] 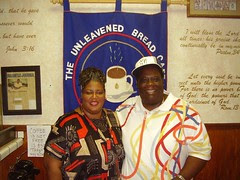 Gloria & Brian Carter were also 'in the house' today. Brian's a DJ... traveling under the name "Bloodwashed!". He's also involved in the DeVos Urban Leadership Initiative, which helps optimally train urban youth leaders. I think Brian's been here lots of times before, and I'd met him before... but this is OFFICIAL now, because we have their 'photo at the banner'.

[So ya'll come... any Saturday... 10am. You're not 'official' til we get your picture 'at the banner' and upload it among all the cafe photos of our other friends!]
Posted by IndyChristian at 1:48 PM No comments: