[Much thanks for photos by Alex Conner] 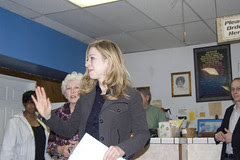 Former 'First Daughter', Chelsea Clinton, came to the cafe yesterday while on the campaign trail for Senator Hillary Clinton. She was accompanied by Mrs. Judy O'Bannon -- former first lady of Indiana. 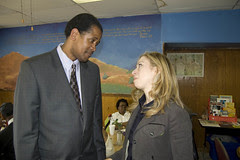 Chelsea's visit came on short notice, and of course was warmly welcomed by everyone -- a hallmark at the cafe... Christ-like warmth & hospitality. 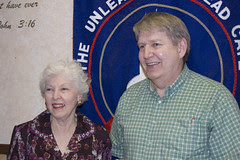 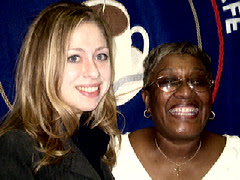 Mrs. O'Bannon and Ms. Clinton were greeted by Sister Elease Womack, the cafe ministry leader. And they made the rounds throughout the cafe, stopping and talking with cafe regulars who were on-hand. 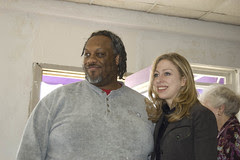 And of course, many photos were taken 'at the banner'. After all, surely you wouldn't travel all the way to Indy and NOT get your photo taken at the banner, would you? *wink* 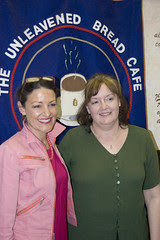 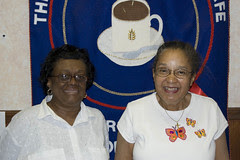 Many beloved friends of the cafe were also enjoying the occasion. And as is our tradition, getting your picture made 'at the banner' is just another way we can honor our neighbors and friends, as we strive to get to know each other quickly.

The cafe photo-pool now contains over 900 such pictures... with a promise of many more to come, should the Lord tarry.
Posted by IndyChristian at 8:01 AM No comments:

Video: 'Have You Heard?'

Catch the vision: If you look across the citywide 'Church @ Indianapolis' and see the digital divide, the multicultural divide, and God's eternal divide... all starting to close... you might be seeing just a little of the impact of this little cafe truly in the heart of Indy...

Reggie Edwards: "What am I good for?"

It's a lot of fun as you can see from the video. In this particular case... [continued at LovingChange.com]

Great thanks to our volunteer techs for providing clips from the recent 'Vision Dinner'. Stay tuned at AskAnythingSaturday.TV for more...


Posted by IndyChristian at 5:20 PM No comments:

More friends at the cafe....

As always, we all met a lot of new people Saturday at the cafe. And one particularly neat introduction was Manuel Apraez, from MY neighborhood in Carmel... 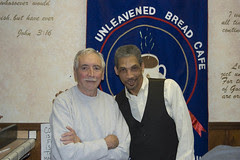 [other recent items from the cafe photo-pool]
Posted by IndyChristian at 12:36 PM No comments: